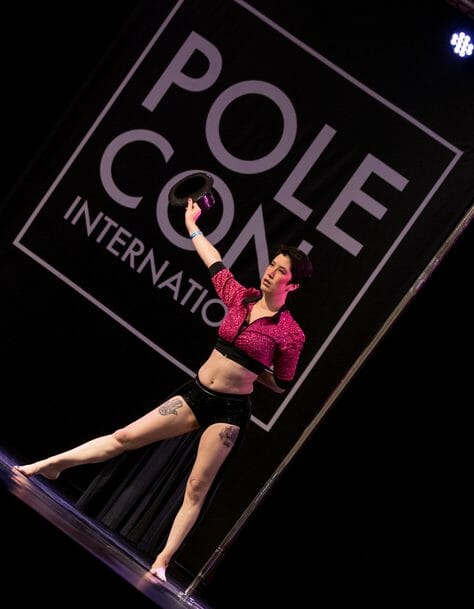 In many ways, preparing for a competition and a performance are similar. As performers, we love the idea of being on stage, coming up with choreography, finding the perfect outfit to wear, and nail color to match! On the flipside, there are many stark contrasts between the two – wardrobe length requirements, no vulgar music, how many points of contact have to be maintained, etc. So, for those who enjoy both competing and performing – here are some pointers and tips to keep in mind!

Unless the competition is more lax, shorts often have to cover the butt entirely, some sort of bra top must always be worn, and anything that comes off may be counted as a prop.

Most performances do not require the butt to be fully covered but may still require some sort of bra top depending on the venue’s specific requirements. Laws also vary by state as to whether or not pasties are considered coverage or not.

It’s a good general rule of thumb when competing or performing to contact the organizer before deciding on wardrobe choices to make sure what you end up wearing is PC to wear on stage without deduction and/or being asked to leave.

Unfortunately most competitions and performances don’t allow for vulgar music so having an edited version is always a good rule of thumb. Often times kids are present so the music can’t be dirty!

Depending on what difficulty level you enter a competition, you may be required to maintain three points of contact with the pole at all times when upside down/inverted. It may or may not seem fair but it is usually the case. However, again, you should contact the organizer if it’s not specified so you don’t get points deducted or disqualified.

Performances are usually pretty lax on this issue. As long as you feel comfortable busting out certain moves, go for it! Show off what you can do! Make sure you practice the routine several times so you are sure you can do the move safely.

Entry fees for competitions can range anywhere from $25-$100 depending on the type of competition, how early you enter, and what category you’re submitting for. The only downside to this is that you may pay to enter but not actually be selected to compete. Some competitions do require a video submission before determining whether or not you’re even qualified to participate. It is unfortunate but that’s just how some of them are. Some are open to whomever wants to participate and those tend to be the ones with the higher fees. PSO competitions are a good example of ones open to whomever wants to participate. Others are a tad more selective.

If the competition is not in the same state or country you live in, you will typically have to pay for your own travel and lodging. If, however, you are a professional dancer you can consider these expenses as tax write-offs. However, it is advised you contact a tax professional before doing so!

Performances are a whole other beast entirely! As someone who has both performed in and organized pole shows, they are as varied as the competitions can be. Some offer pay, some offer discounts to the general event itself (PoleCon for example! Thanks Colleen!), some will even pay a nice amount as well as your travel and lodging. It really all just depends and depends on how well-known you are within the pole community. Performances may or may not require dress rehearsals so it’s a good idea to be able to commit to more dates than just the performance itself.

Regardless of whether or not it’s a competition or performance, spending lots of time rehearsing is always a good idea! You may even walk away with extra dough if people really liked your performance for a showcase!

I should mention studio showcases here as well. Every studio operates differently when it comes to their showcases. But, you should treat it no differently than any other performances you’ve been accepted to participate in. There will probably be a rehearsal(s), you may have to coordinate outfits with other performers, and you may even be asked to help sell tickets. There typically isn’t any pay associated with a studio showcase but you may get a free guest ticket or something to that affect.

Props are allowed in both competitions and performances as long as they meet certain criteria and have been approved by organizers.

Props can either be helpful or a hindrance to the performance. Stuff can break in transit or even during a performance on stage. If you are relying on someone else to provide a prop (a chair for example that you can’t really check onto a plane), you run the risk of it actually making it.

On the other hand, props can be a great addition to any piece. I’ve seen awesome signs for ones that were politically driven, hats, inflatable body parts to add some fun comedy, articles of clothing that were removed to help make statements, etc.

I don’t think I can stress enough, though, to make sure to rehearse with your props!

One of the big differences between a regular performance and a competition is that a competition routine is scored and stacked up against other competitors. Some folks don’t like that and, thus, regular performances are encouraged for those looking to have stage time outside of the pole classroom. Sometimes, though, a little competition is good. I personally enjoy both avenues because they force me to focus on different strengths and improve weaknesses I may have in certain areas. In many cases, those who compete often work with a coach to help them improve their chances of a higher score and/or medaling. As mentioned previously, there are a variety of different competitions out there so knowing how points are earned, deducted and totaled ahead of time is important.

For a general performance, working with a choreographer can help but is certainly not required. Sometimes songs are chosen for you whereas other times you can choose your own song. As anticipated, there are no points awarded but you should still aim to give a stellar performance – especially if you are being paid to be there!

Even the most prepared and rehearsed routine can sometimes have to be switched up if you feel unsafe doing a certain trick or spin on the poles you are performing or competing on. There have been a couple of occasions where this has happened to me. It isn’t always an ideal situation but it’s always better to be safe than sorry!

Whether competing or performing, you should still go out with a smile on your face and have fun! Don’t worry about making a mistake (you’re the only one who knows how the routine is supposed to go)! Go out and do your best!

So you want to be a stripper—Part 2

“So, Like, Are You A Stripper?”: A Pole Dancers Guide To A Very Common Question

“So, like, are you a stripper?” I conducted a survey for a talk I did…

Should Pole Newbies come to #PoleCon2015?