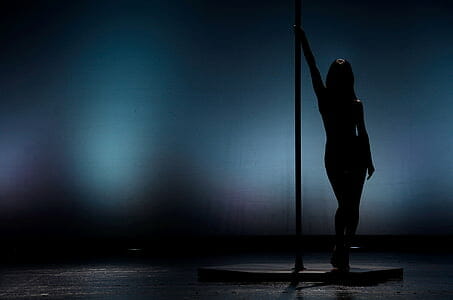 In case you somehow missed Shakira and J.Lo’s super lit halftime show, Shakira worked it out and J.Lo graced us once again with some pole tricks. She even hired several pole dancers (interview with them coming soon to the PoleCon blog!) to entertain the crowd and folks at home with her. I got to give her mad props for that. Pole dancing has definitely come a long way – but we still have a ways to go in mainstream media, sporting events and households.

When I took my first pole class ten years ago (wow that feels like forever ago!) I felt like it was something I had to hide from my friends and family. I was not yet affiliated with a studio, I was just taking classes at a dance studio that offered all types of dancing. To be honest, I only took a handful of classes there because of how the studio was setup, it wasn’t totally private and people could see in while we were in class and that made me uncomfortable. About a year later, however, I joined my first legit pole studio and the rest was history. I was there several days a week, every week. I did showcases, brought a friend or boyfriend to watch my graduations and posted pics on Facebook (IG and Snapchat weren’t around yet!) to show off my progress.

As a majority of you have also probably experienced, some of my friends weren’t so supportive of my newfound hobby. And even people who I thought would be the most open-minded. My gay guy friends said they were unfollowing me, some of my female friends did as well and they were models! I remember my mom questioning whether or not I was planning on becoming a stripper. I mean…I did….but for until years later!

I was so frustrated with the backlash I received online and even in just social settings. I would tell people I would meet out or through friends that I pole danced and it immediately drew a negative connotation for them. Even when I told them I just did it for fitness and fun, it didn’t seem to matter. Guys would ask to see pics, girls would assume I was a stripper, and it sucked. I felt very misunderstood.

When I finally joined the pole community at large, started competing and discovered PoleCon, I knew I had found my peeps who probably experienced all the same struggles that I went through. We all have had people bash us online, hate on us for looking good on a pole in a cute outfit, or just be conservative and think it’s not something that the public needs to be exposed to. Yet, cheerleading, regular dance, gymnastics and swimming all wear similar ‘uniforms.’ They all have skin, breasts and butt areas exposed or displayed. So why is there such a stigma attached to pole dancing?

When I saw the movie Hustlers, I was like man I don’t like how strippers are being portrayed in this film, but maybe it will encourage more women to start pole dancing if these big name actresses are doing it. Perhaps there was a spike in newbies taking classes and lessons, I honestly have no idea. But when I saw it at the Superbowl, I was like, we’ve made it! We’ve come so far in just a decade! Yay pole dancers!

And the same “negative Nancys” who probably have nothing better to do with their time comment on social media about how it’s not ‘family-friendly’ and that they can’t believe they had the audacity to show women like that! First of all, if J.Lo who is a mom and a fifty-year-old woman can get herself up a pole and learn tricks, then anyone can do it. I mean granted she probably has a personal trainer and all the money in the world to hire the best instructors but theoretically anyone can do it. And we’ve seen it at PoleCon, in competitions and performances.

The same type of people who wanted to bring us down a decade ago are back but this time people are fighting back. This time, people can say pole dancing has made me friends from all over the world, helped me get in shape, gain self-confidence and helped me to love myself. I don’t know of any sport or activity that has that ability and I’ve tried a wide variety of things growing up. Regular dance (ballet specifically) was so cut-throat that I dropped out. While you may be on a team for gymnastics, swimming or cheer, you’re always competing against the other girls for top spots and/or head-to-head competitions. So it’s never really a warm and fuzzy feeling all the time.

Pole dancing isn’t like any of those other sports and I think that’s what women love about it. No matter how old you are or what body type you have, we welcome everyone. We’ll even welcome the “negative Nancy” who thinks we’re all a bunch of immoral strippers destined to go to hell because that’s who we are. I mean sure we might be skeptical of her intentions, but you can still come take a class. We are by far the most diverse, most welcoming and most accessible sport out there. So I’m taking us being in the Superbowl as a huge win for dialogue, encouraging more people to try it, and eventually shutting down all the haters out there.

What’s In Your Carry On? Your Top 10 Pole Convention Essentials

Get ready to strap on your platforms and slap on some iTac! With an exciting…

Okay, so your pole studio has booked a professional photographer to do a photo shoot…