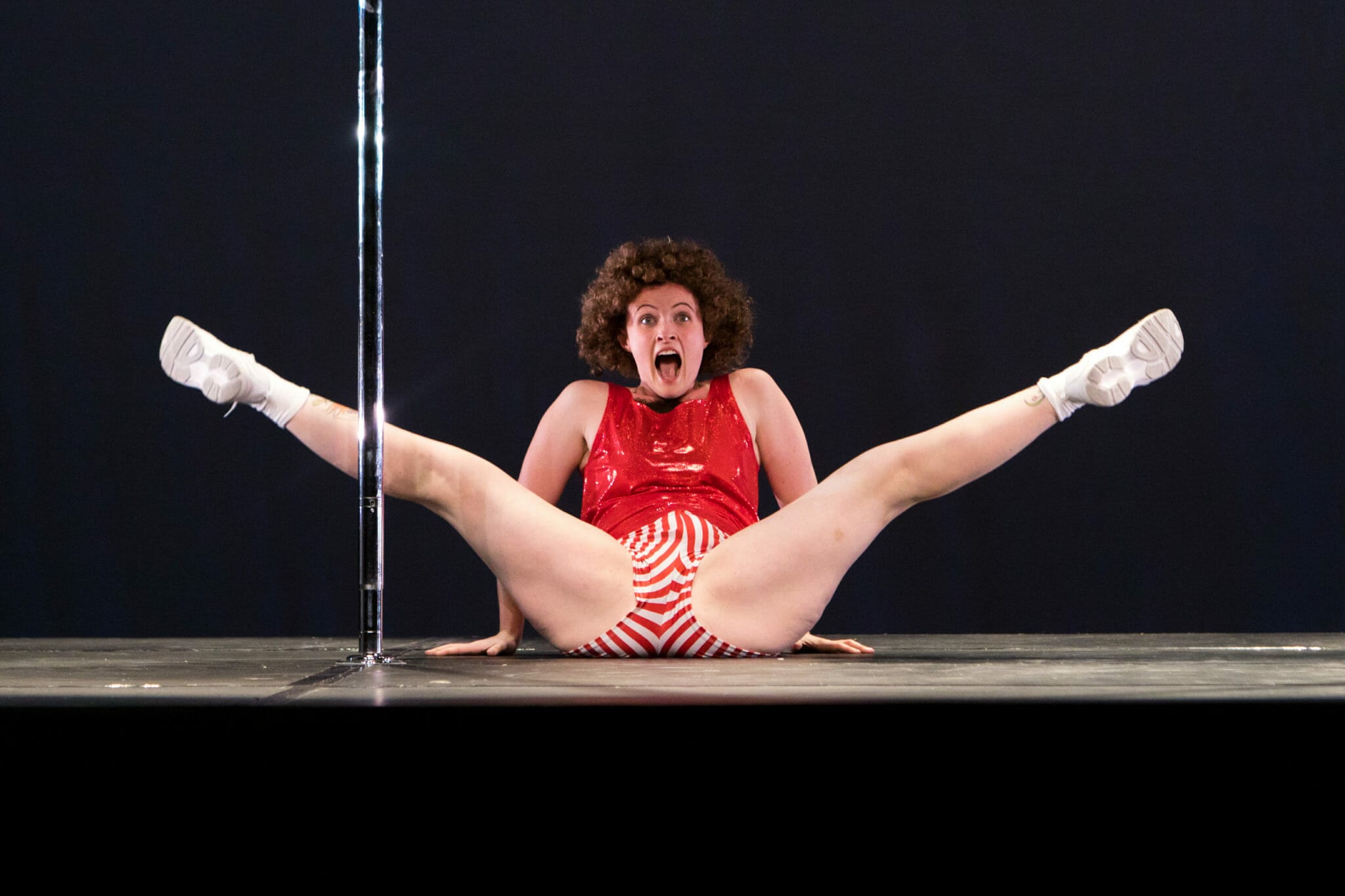 It’s your big moment. You’re finally performing that one routine you’ve been working on since what feels like the dawn of time. You get onstage. You perform your heart out. And then….crickets. Sounds like a nightmare, doesn’t it? There’s a major difference between being on stage and performing on stage. More often than not, that difference lies in being able to connect with the audience. It might seem like a simple task yet so often we, as dancers, get so trapped in our vision that we forget to take a step back. Here are 5 tips on how to improve your act by connecting with the most critical judges of all: your audience.

Imagine reading a book where no characters are introduced and all that happens is there’s some wall paper and a snail and possibly a sad little girl and then the mom goes into the kitchen and then the horse in the ballroom decides to run away and that’s the end. That’s what it’s like watching a dancer who has no concept of how to tell a story. The truth is: when you are on stage dancing your body is storytelling. There is a beginning, a middle, and an end to your story; all of which the audience is watching.

Like with telling any good story, you need to think about how you are going to make the plot clear to the people who are listening (i.e., your audience). You want to make sure you are picking a theme that: a) is clear and b) is relate-able. Sometimes we can get so caught up in wanting to tell a very specific story that our message gets muddled in the process. For example, everyone can relate to mourning over the death of a loved one. However, not everyone knows the feeling of mourning the death of a clown that you loved at your 2nd birthday party who also happened be a magician. You can always honor someone in your routine by using that memory for inspiration or dedicating a performance. However, by making a performance oddly specific, it makes the audience feel like you are telling an inside joke that only you understand.

Tip 2: Stare them Down 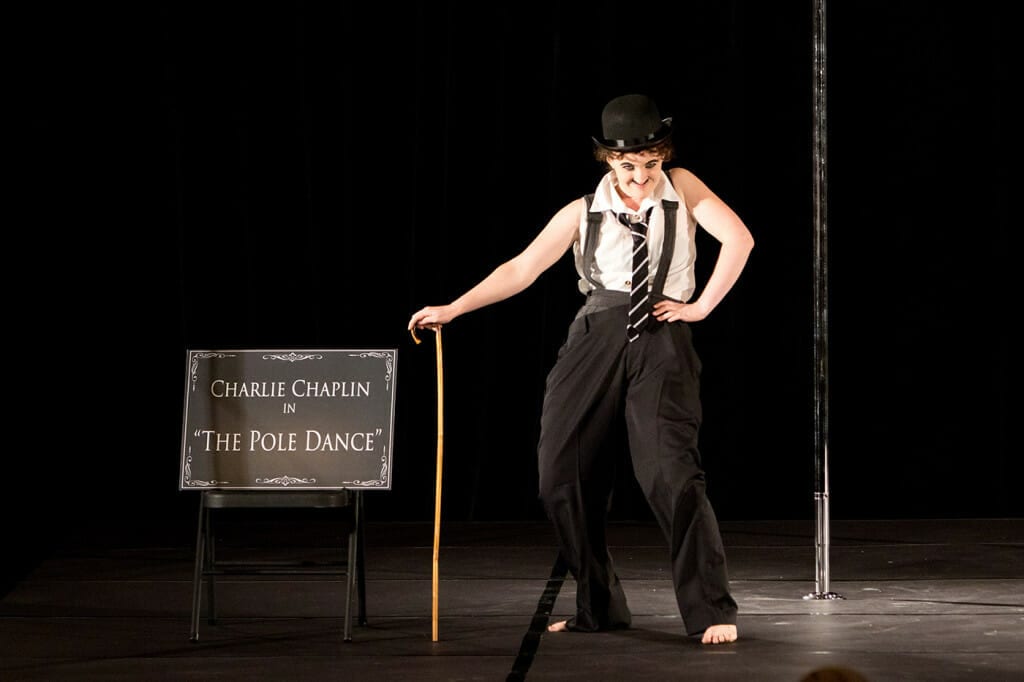 Not literally of course! It’s a natural, and frequent, phenomenon; we can get so involved with what we are doing on stage, we don’t even acknowledge the other people in the room. Imagine having a conversation with someone who is staring at the ceiling or, worse yet, keeping their eyes closed the entire time for no particular reason. This is what it feels like when you are watching a dancer who refuses to face the crowd. You want to make the audience feel like you are pulling them in to your performance. I promise, it doesn’t take much. All you need to do is look into the audience! You want to make them feel like you are sharing a moment with them. By simply glancing out into the audience during a particularly dramatic moment in your piece, you are making them feel like you are reaching out and bring them in with you. Can’t see your audience? Pretend you are looking at the back wall of the auditorium.

Tip 3: Smile for the Camera 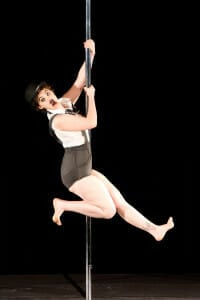 Whether you are literally purchasing and/or receiving a photo/video package with your performance or not, it helps to think about what “picture” you are creating. Remember, you’re in complete control over what the audience does and does not see. Think very hard about the images that you want to portray to help share “moments” in your routine. Do you want the audience to see your bountiful booty? Or would you rather they see the flawless shape you make when you go into your infallible Rainbow Marchenko? I’m sure your butt is amazing, but it’s important to put yourself in the shoes of the audience. If you were them, which would you rather see, a butt or a feat of immaculate flexibility and strength? If you’re having trouble visualizing what your routine looks like to the audience, try taking a video of yourself and watching it carefully. See if you can pick out 10-20 moments where you are showing the story that you are telling. The idea here is that if a camera can pick up on these moments, so can the audience members and that’s what makes a routine go from ordinary to extraordinary!

Tip 4: Balls to the Wall…Metaphorically

This tip applies to several aspects of performance: from dedicating yourself to telling a story, to fully realizing each and every action you take during your routine. No matter what you do when you are performing, you want to make sure you do so to your fullest. Go big or go home. Don’t just decide to do an Indiana Jones routine and only use a hat as a prop! You’re going to need a costume, whip, and humongous gemstone to steal too! Keep in mind that most of the time, your audience is at least 20 feet away from you. Erase “subtlety” from your repertoire and make sure you are performing larger than life!

I’ve said this once and I’ll say it again: PRACTICE, PRACTICE, and PRACTICE. The audience is going to love you even more if they aren’t afraid you will fall out of that Russian Split. The more at ease you look, and the more in the moment you are, the less the audience will worry about your safety and the more they will indulge in your performance! Trust me on this one! Practice so that your routine until it looks easy.

Connecting with your audience can be challenging. You never know what journey someone else has gone through and what will strike a chord with them. But by telling a clear story, considering their perspective, and ensuring that you’ve had adequate time to prepare for your performance, you will make them feel like you have thought about their needs and wants. They want to love you. Give them an opportunity and love you they shall!

Performing under the stage name, “The Pole Comedian”, Amy Rosvally has dedicated her pole journey to bringing laughter and joy to her audience. Amy is the current reigning Entertainment Level 3 Champion in two regions and has no intention in stopping there. Having grown up in the theatre world, she believes strongly that pole dancing is the one place where she is able to bring everything she has learned about performing into one cohesive extravaganza! Watch out world! The Pole Comedian is coming, and she’s got her clown nose on!

Stretch Marks: the chronic frustration of a whole life with them

I can’t remember my body without stretch marks. I am 19 and have had them…

Pole Party Games For Your Next Event

How to Put on a Dope Performance on a Budget

Putting on a performance, especially one for a large crowd like PoleCon, is no easy…